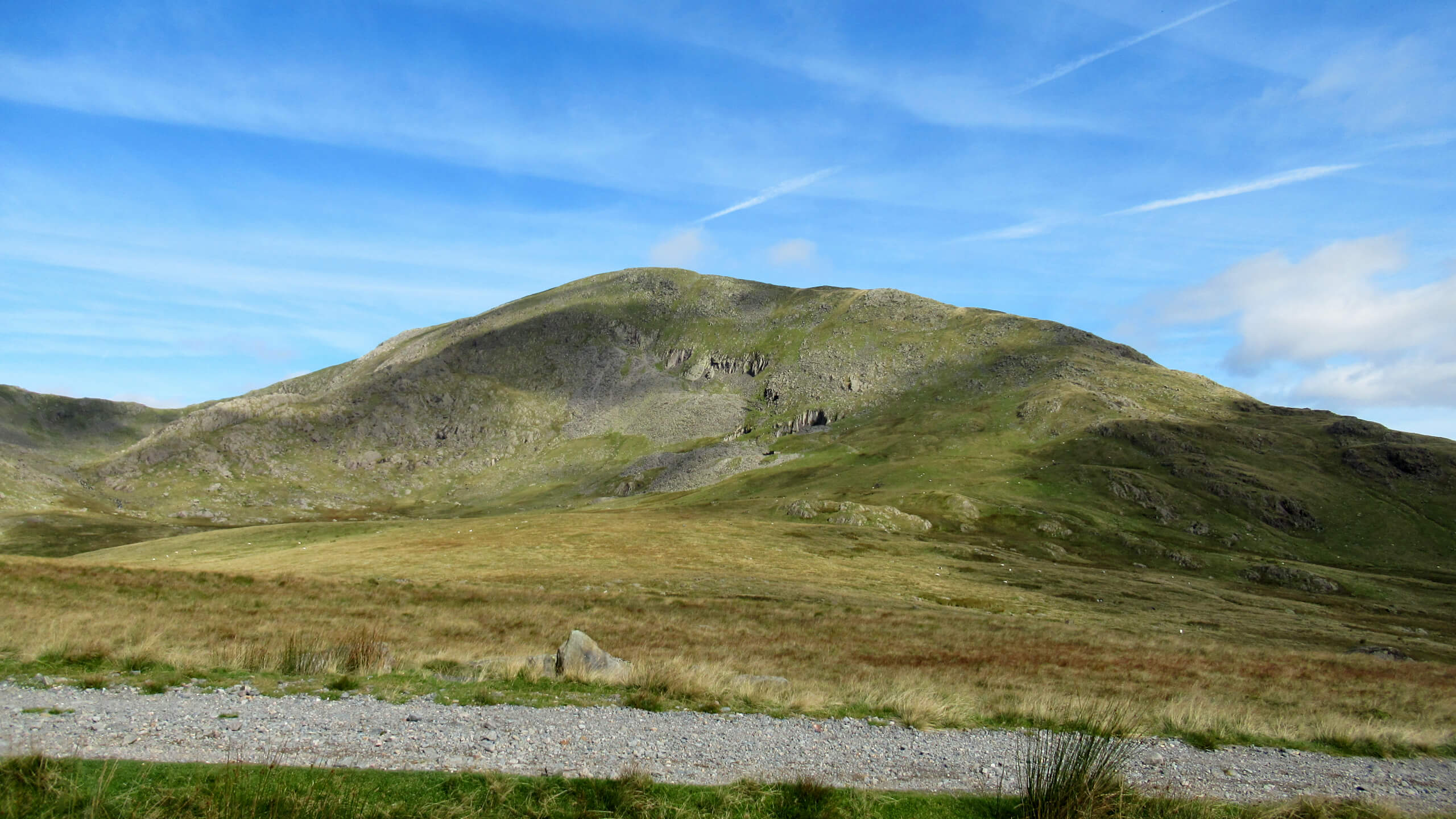 The Lake District National Park is one of the most scenic areas in the British Isles. And, what better way to enjoy such natural beauty than with a walk through the countryside to the top of a mountain… This Old Man of Coniston walk is the perfect answer!

The Old Man of Coniston is a popular peak in the Lake District’s southern fells with its incredible views and challenging route. This circular walk route takes you up three slightly lower peaks as well as Old Man Coniston to offer the best views of the summit from all angles.

This post has all the information you need to enjoy walking on the Old Man of Coniston including maps, photos, step-by-step instructions and answers to all your FAQs!

Realistic total time includes stopping for snack breaks, photographs and to enjoy the view. Enjoy the view is otherwise known as recover from steep ascents for me!

Where do I start walking from?

The truly circular route starts (and ends) at Walna Scar Car Park. Parking charges apply 9 am to 6 pm, 7 days a week including bank holidays. Parking here costing £4 for up to 4 hours and £8 for up to 9 hours. You can pay by card or cash at the machine. To note, Walna Scar Car Park used to be free, but charges were introduced in 2021.

However, if the Walna Scar Car Park is full, you will need to park at Old Station Car Park on the outskirts of Coniston village. Although, parking here does add on over a mile to the round trip walking distance, with a steep uphill walk to Walna Scar. Parking charges also apply 9 am to 6 pm, 365 days a year at Old Station Car Park. £2.50, for up to 2 hours, £4.50 for up to 4 hours and £7 for up to 9 hours, card and cash accepted.

If you do start at the Old Station Car Park, the route is 7.5 miles in total. From the car park, head north along Old Furness Road to the cross junction. Then, head left (west) uphill (it’s the track with national speed limit signs on either side).

Don’t rely on Google Maps to navigate in the Lake District, exact locations of the paths and peaks can vary from those listed on the map. I’d recommend picking up an Ordnance Survey map for a few pounds and learning some basic map reading (try YouTube) before attempting this walk.

Heading west out of Walna Scar Car Park along Walna Scar Road, the path heads straight along a fairly gentle incline. After about 1 mile, the path forks in two – keep straight.

The path continues straight for another mile, at which point it will turn sharply to the right with a steep ascent. At the top of this peak, you’ll be at Brown Pike. You’ll be able to look north along the ridgeline and see Buck Pike and Dow Crag ahead, as well as the summit of the Old Man of Coniston on your right.

Luckily, from here there are no complex instructions needed, you can follow the same path to the top of Old Man Coniston!

From Brown Pike, continue along the ridgeline. There’s no let-up between the peaks, as you’ll gain just over 40 metres of elevation in just 0.4 miles. The peak of Buck Pike isn’t too obvious, as there isn’t any marking. But, the terrain does level out for a short distance.

The third peak of the route is just a further 0.3 miles north of Buck Pike. The ascent to Dow Crag is steady and you’ll want to enjoy this relatively flat part before the climb to the Old Man of Coniston summit begins!

Striking rock formations mark the peak of Dow Crag, plus, you’ll know when you’re there as there is no more hill left to walk up! Here, you’ll have fantastic views of the western part of the Lake District National Park, including Scafell Pike. And, on a clear day, you’ll be able to see the Cumbrian coastline and the Irish Sea… Because getting top quality views of a Nuclear Power Station is on everyone’s bucket list, right?

Dow Crag to the Old Man of Coniston Summit (803m)

Numbers can be deceiving and that is certainly the case when comparing the summit elevations of Dow Crag and Old Man of Coniston! While their altitudes have a difference of just 25 metres, the route requires you to descend almost 120 metres from Dow Crag before gaining another 130 metres of elevation on the way to the peak of Old Man Coniston.

The total walking distance between Dow Crag and the summit of Old Man Coniston is just 1 mile. But, the fun of the steep downhill descent over just 0.4 miles is soon replaced by the slow pain of the remaining 0.6-mile, steady slog to the trig point marker of the Old Man of Coniston.

From the summit of the Old Man of Coniston, the views are simply spectacular. To the west, you’ll see the three peaks you’ve already covered – Brown Pike, Buck Pike and Dow Crag. Then, there’s Coniston Water, Lake Windemere and the Yorkshire Dales National Park in the distance to the east.

When you’ve finished taking in the views, it’s time to start the descent back to the car park. The path down from Coniston’s Old Man zig-zags from the summit down to Low Water and is much less clearly trodden than earlier parts of this route. That, combined with the loose rock underfoot can make this challenging, particularly in less ideal weather or with less suitable footwear.

The edge of Low Water is a great place for a rest. You’ll be straining your neck looking almost vertically upwards at the summit of Old Man Coniston. Hard to believe you were there just minutes ago! From Low Water, the path continues (much more clearly marked from here) past the old quarry and mines. The remains of the pulley systems as well as the heaps (literal mounds) of slate are quite the sight!

Continue along the path until it turns to the right, back towards Walna Scar Car Park. From here, the path is fairly flat and you’ll be making good time and progress to a well-deserved sit-down! Back at Walna Scar, you can look back on Old Man Coniston and feel totally satisfied in completing the walk!

“One of the best walks I’ve ever been on!“

This circular route to the summit of Old Man Coniston is honestly one of the best walks I’ve been on! It’s challenging, but more so from a sustained ascent and a longer duration. In particular, no scrambling or climbing with your hands is required and I never felt like I’d never make it, I knew I just had to keep going and telling myself it would be worth it! Easily one of the best Lake District walks, if not across the whole of northern England for its balance of views, challenge, location and popularity.

For transparency, I did get lucky with the weather as I walked up on a clear day in September. It was also a weekday, so it may well be busier on weekends, but I only saw a handful of other groups. Having said that, with nearby Scafell Pike being the highest mountain in England, crowds are typically drawn here rather than the Old Man of Coniston.

For more countryside walks, check out these posts on the best places in the Yorkshire Dales!

How long does it take to walk up the Old Man of Coniston?

If you walked this route at a fairly good pace without stopping, I imagine you could complete the loop in around 3 to 3.5 hours. Realistically, for the average person enjoying this walk, I would allow 5 to 6 hours. If you just wanted to walk from Walna Scar to the top of Old Man Coniston and back again, then the shortest route is 2 miles each way. And, this would take maybe 2 to 2.5 hours non-stop.

Is the Old Man of Coniston an easy walk?

When combining the elevation gain, distance and conditions underfoot, then the Old Man of Coniston is not an easy walk. I would consider this more of a full day commitment than something to do for a few hours. I was exhausted the evening after climbing Old Man Coniston and my legs ached for a couple of days!

How hard is this Old Man of Coniston Circular Walk?

What’s the best place to stay close to Old Man of Coniston?

There are plenty of accommodation options in the village of Coniston, staying here would mean you don’t need to drive to the start point. However, Coniston is also just a short 20-minute drive from the towns of Ambleside and Windermere as well as being around 40 minutes from the larger towns of Keswick and Kendal.

Whilst Coniston is a beautiful village located next to Coniston Water, there is perhaps more to do and see in the other towns mentioned above, making them better for an extended stay. For more ideas of what to do across the Lake District, check out this post from My Travel Scrapbook.

Is the Old Man of Coniston a mountain?

Yes, in the UK any peak over 600 metres of elevation is classed as a mountain. At 803 metres, the Old Man of Coniston clearly meets this definition.

Is the Old Man of Coniston a Wainwright?

Yes! The Wainwrights are a list of 214 fells in the Lake District that featured in Alfred Wainwright’s Pictorial Guide to the Lakeland Fells published in the 1950s and 1960s. The 7-part book series groups the different areas of the Lake District and Old Man Coniston is part of the Southern Fells, along with Scafell Pike.

Prices and offerings mentioned are correct as of April 2021 but are subject to change in future.